Planer is sure not a machine that will be needed by all people but it is important for both professionals and DIYers who need to cut a wood in an exact thickness easily. In fact, it is almost impossible to get the same result if you are only using hand planers with the same speed. Two popular planer machines in the market are Dewalt DW735X vs Makita 2012NB which is just as dependable and easy to use. If you are confused about which to choose, go check our article below. 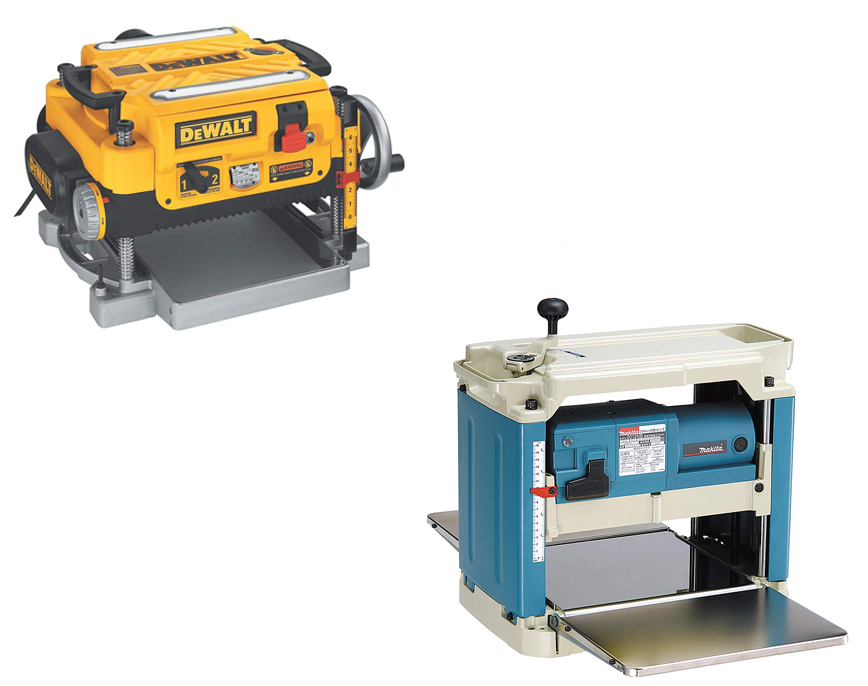 About Dewalt DW735X
We are sure woodworker are already familiar with planer because this machine is mainly used for the purpose of milling woods so they can be used to build furniture or other objects easily. These machines is capable of making the old and rough wood to become smoother by cutting the sides revealing a new surface. Dewalt DW735X is a good option when it comes to benchtop or thickness planer because it offers a dependable performance as well as ease of use.

Dewalt DW735X Design
You probably also wondering why Dewalt DW735X has the word “X” in the end of the product and is it a different product than DW735, well the answer is they are the same machine but this model is coming with 2 metal extension shelves as the standard equipment together with an extra set of knives. The planer is clearly well built with a robust construction and to adjust the height, you can use the adjustment wheel at the side that can be set up to 6 inches. Read also: Dewalt DW734 vs DW735 here.

Dewalt DW735X Features
Just from the build quality alone, Dewalt DW735X is already impressive and it will surely bring many years of good performance together with durability. What makes this thickness planers special and different from many other similar machines is the speed options. Unlike those that only operate at one fixed speed, this planer offer you to choose between it slower and faster maximum speed to match the result with what you need the woods to be through the dial you can find at the machine’s front.

The slower speed is used when you want to get a nice and smooth finish because the setting will make the blades to cut the wood 179 times per inch. At the other hand, the higher speed setting increase the automatic feed speed and lowering the number of cut per inch until only 96, but just like you want, it process faster and makes dimensioning wood also quicker. To deliver a quick operation, Dewalt DW735X is coming with 20.000 RPM motor with 10.000 RPMs cutterhead.

Another good point about this popular planer is the dust collection because unlike some that only dispense the wood shaving from the machine, this one is already has a built-in blower to help you dispense wood shaving with power and when tested, it works very well by shooting shavings everywhere which is great to keep the dirt from building up on the blades and then harming them. To make it easier to clean, it is recommended to connect the planer with dust collection with 4-inch connection.

About Makita 2012NB
There are actually several products out there that can offer the similar dependable performance as DW735X but it is not many. If you are looking for a powerful planer but has tighter budget or just simply want to spend less, you may want to take a look at Makita 2012NB. This planer is also popular among woodworker because it is proved to deliver productivity in a small compact package. It is also able to operate with less noise and equipped with the company’s proprietary head-clamp to prevent snipping.

Makita 2012NB Design
We know that snipping is always a problem when using small planer which caused by the movement of the cutter head assembly. But, you don’t have to worry about the issue since the company use their Interna-Lok clamping system built in this machine’s lightweight sturdy aluminum body. The company claimed that this system will make the planer able to minimize the chance of wasting material due to snipe on woods. To adjust the finished dimension, you can use the crank handle at the top by turning it counter-clockwise.

Makita 2012NB Features
Makita 2012NB is coming with a powerful motor that boasting a speed about 8.500 rotations per minute under no load with its 15 Amp motor which is already good enough to deal with most of the work. We know that noise is another issue that can be annoying but is unavoidable when using planer because most machines are emiting a loud noise when operating but this is not an issue here since the company claimed it can work quieter than many of the competitors for operator comfort.

Beside the powerful motor and less noise while operating, we also should mention another helpful features which is the LED light that indicates whether the planer is connected to a power source or not and if the large paddle is activated or not to remove all the guesswork. Coming with the unit, there is a changeable blades which will take little effort to remove and replace for increased convenience.

The feed rate is 28 feet per minute and you may do multiple passes until the preferred result is achieved. Overall, this machine is capable of giving a smooth and consistent result in each operation. For the dust collection, you can purchase additional hood to connect it with your dust collection if you are already using one to ease the cleaning up process.

Comparison
Now, let’s compare Dewalt DW735X with Makita 2012NB. As you may already know, what separate this two planers the most is the fact that DW735X is coming with 2 speed adjustment as well as a built-in blower to dispense wood shavings while the other is not. However, 2012NB is equipped with an anti-snipe clamping system to help reducing snipe.

Conclusion
All in all, the decision is all yours to make. In our opinion, both of them are good planners but if you wish the one that offer more capabilities, we will recommend you to pick Dewalt DW735X because of its double speed options and built in blower that are useful to ease your work.